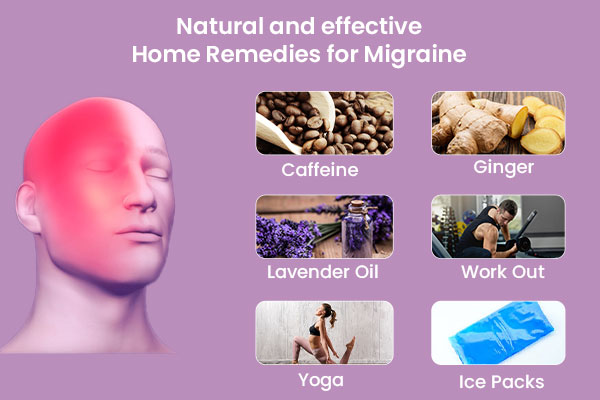 Migraine attacks aren’t typical headaches. You may experience pounding pain, nausea, and sensitivity to light and sound. When a migraine attack or episode occurs, you’ll do almost anything to make it go away.

Natural remedies are drug-free methods of reducing migraine symptoms. These at-home treatments may help prevent the onset of migraine attacks or at least help reduce their severity and duration.

Keep reading as we take a look at 15 natural remedies that may help you manage migraine symptoms.

Note that migraine attacks may require treatment with prescription or over-the-counter (OTC) medication. Speak with a doctor about a treatment plan that works for you.

Diet plays a vital role in preventing migraine attacks. Many foods and beverages may be migraine triggers, such as:

A small amount of caffeine may ease migraine pain in some people. Caffeine is also in some migraine medications. But too much caffeine may cause a migraine attack. It may also lead to a severe caffeine withdrawal headache.

To figure out which foods and beverages trigger migraine attacks for you, keep a daily food journal. Record everything you eat and note how you feel afterward.

Inhaling lavender essential oil may ease migraine pain. Lavender oil may be inhaled directly or diluted with a carrier oil and applied in small amounts to your temples.

A 2016 randomized controlled study found evidence that 3 months of lavender therapy as a prophylactic therapy, meaning taken before a migraine attack begins, reduced frequency and severity of migraine attacks. However, research is still limited.

A  published in the journal Phytotherapy Research examined the ability of various herbal treatments, including lavender therapy for migraine. The authors found mixed or limited evidence to support the use of butterbur and feverfew for treating migraine but didn’t note that current research supports the use of lavender.

According to the authors, many studies had a high risk for bias, and more high quality research is needed.

Acupuncture involves injecting very thin needles into certain parts of your skin to stimulate relief from a wide variety of health conditions.

A  also found moderate evidence that acupuncture may reduce headache symptoms. In the results summary, the authors explain that if people had 6 days of migraine per month before treatment, it would be expected that they would have:

Feverfew is a flowering herb that looks like a daisy. It’s a folk remedy for migraine. It still isn’t well-studied, but there is some evidence that it may be slightly more effective than a placebo for treating migraine.

In a , which is an update of a previous 2004 study, the authors concluded that larger studies are needed to support the use of feverfew for treating migraine.

The authors note that one larger study published since the 2004 review found 0.6 fewer migraine days per month in people who took feverfew versus a placebo. They describe previous studies as low quality or providing mixed evidence.

The  published in Phytotherapy Researchalso summarizes the finding on feverfew as “mixed.”

The chemical menthol found in peppermint oil may help prevent migraine episodes, although there’s a very limited amount of research.

A  compared the effects of nasal 4 percent lidocaine with 1.5 percent peppermint essential oil and a placebo for managing migraine symptoms.

Ginger is known to ease nausea caused by many conditions, including migraine. It may have pain-relieving benefits for migraine attacks. According to a , one randomized controlled study found evidence that gingMore research is needed to understand the extent and usefulness of ginger for treating migraine-related pain.

LEAVE A COMMENT
Whatsapp Chat
Please Message Quickly On Whatsapp for any Question or query related to our products.

Added to cart successfully. What is next?